For Yin Mingyan who is 50 years old,  all childhood memories are pinned on the dolls she made.In the past years ,dressing was simple and plain. Yin often makes some simple modifications to the clothes, such as changing a collar, or adding a lace, but she is not satisfied: “Look at the Soviet and Albanian movies, the movie girls in flower dress very beautiful, but at that old time it was regards strange dress. I like the dress but can’t wear it 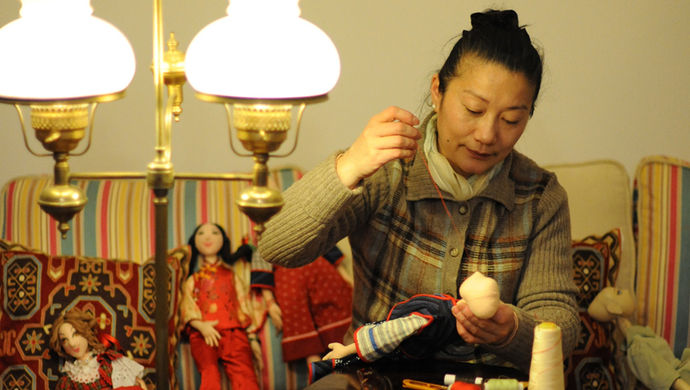 .”Therefore, wear all kinds of ” strange clothes” for the doll became the biggest pleasure of Yin Yan. Unexpectedly, this hobby has continued in her growth. So that after she retired, she simply bought a room in Nanxiang to become a studio, and concentrated on the creation of rag dolls.

Making a doll is like immersing in a dream
In the 2016 Shanghai Handicrafts Competition, Yin Mingyan’s entry is a fabric doll with Chinese red as the main color. 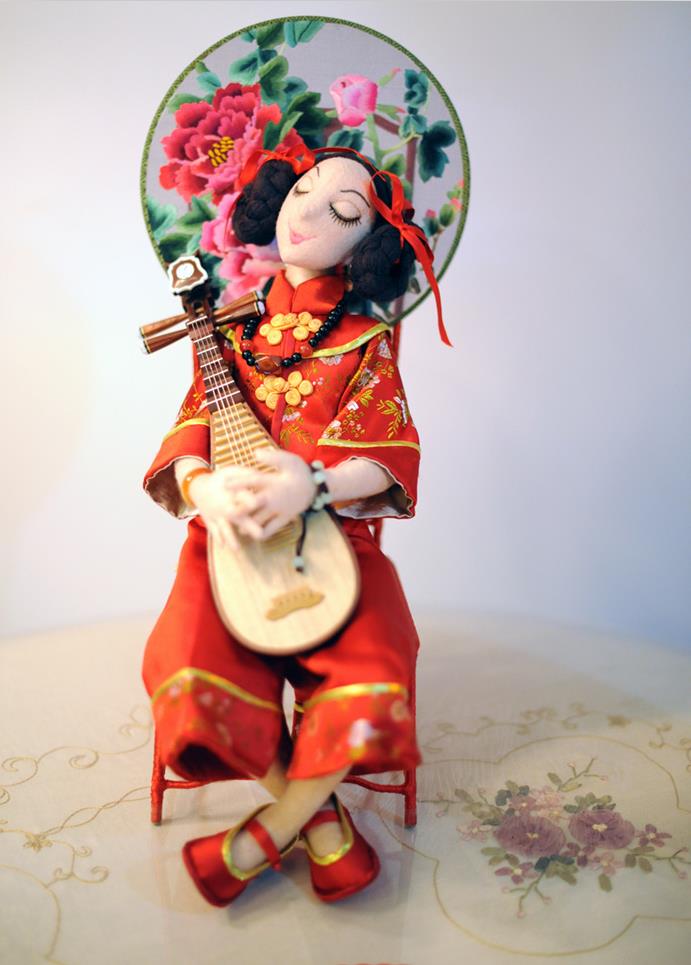 The doll’s limb material is made of wool, soft and full, close to the texture of the skin. The doll is dressed in a large red brocade coat with a lustrous finish. The top is designed with a confrontation, the buttons are jade-like, and the clothes are decorated with floral patterns. The doll’s twist is made into two hairpins, which are very traditional. The details of bracelets, embroidered shoes, etc. are also meticulously detailed, and there is also a miniature pimple in the arms, which is generous. 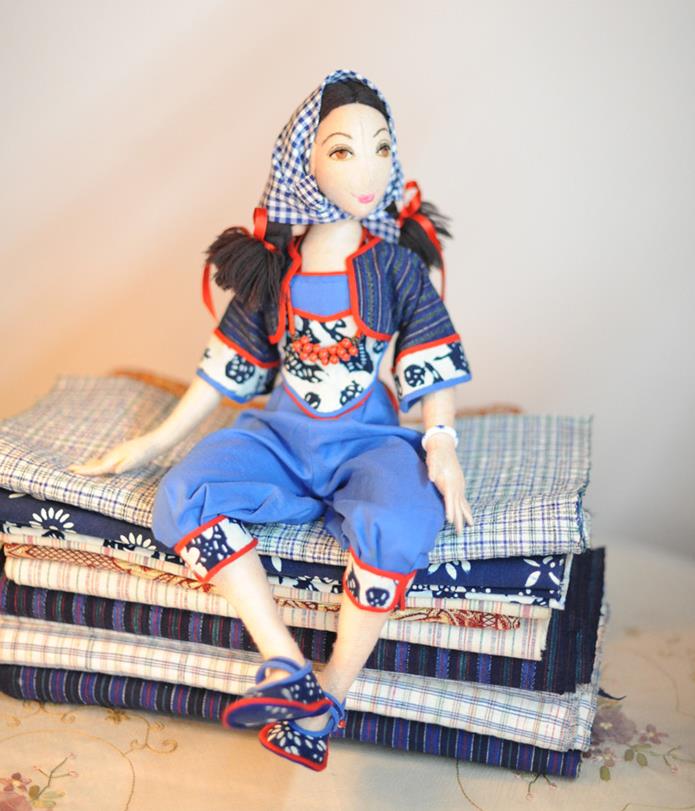 After seeing this doll, many people were very surprised and felt like she was like the Chinese version of “Barbie.” Yin Ming has named the work “Recalling Childhood.” She said that when she saw this doll, she would think of the scenes of childhood laughter and the songs of childlike fun, the sweet smile of the girl playing with the fun, and the expression of the little scorpion dangling. “Children’s memories are like a dream. Whenever I make a doll, I am immersed in my dreams.”

Yin Ming’s childhood was spent in an old alley in Caojiadu. The doll is the favorite toy of her childhood.

Mother bought her a variety of rag dolls, the size is small nearly two feet. Among the many dolls, her favorite is a large doll bought from Jing’an Temple, which cost around 9 yuan. The doll is about one arm high, the torso is made of cloth, and the limbs and head are made of plastic and can be rotated.

Her mother made the left corner fabric of the new clothes, or the rag clothe bought in the cloth shop. After her tailoring and sewing, it became a beautiful style of the dress and the floral skirt. . The big and small dolls in the house, Yin Mingyan decorate them with new clothes for each one, and the most favorite dolls which have seven or eight different combinations.

However, Yin Mingyan made his own doll for the first time in 1997. That year, Xinmin Evening News hosted a Chinese National Ragdoll Design Grand Prix. “after know the reason for running the game, I have a bit of a bitter taste.” Yin Mingyan said, “An old foreign lady came to China for traveling, Before left, she wanted to bring back gift to her granddaughter with a doll with Chinese characteristics, but for search for many places in Shanghai. she couldn’t find it,” At that time, most of China’s dolls with the appearance of a blond foreign girl, and there were very few dolls that showed the Chinese appearance and posture.

After seeing this news, Yin Ming suddenly sprouted the idea of ​​making rag dolls by herself, both fulfill his childhood wishes and inheriting the traditional aesthetic taste. She made three Chinese-style rag dolls and named it “Ni Niu Series” to participate in the competition. The doll’s clothes are made of blue prints and satin. “The first time try to make, styles are  simple, and the doll’s eyes are replaced by buttons.”

What Yin Mingyan did not expect was that the “Ni Niu Series” won the first prize and she also won a medal . The first time I made a doll, it brought such a big surprise. In the next few years, she spent all her spare time wondering how to make the dolls beautiful and good.

In 2006 and 2007, the Shanghai Women’s Federation held two handicraft Grand Prix in order to welcome the World Expo. Yin Mingyan sent the improved rag doll to the competition and won the second prize for two consecutive years. At this time, she retired already so she had more free time, she put more energy into the production of handmade dolls.

From design to final completion, a ragdoll often spends half a month to a month.
To make a doll, the first step is to draw the shape of each piece of cloth on the paper and cut the cloth according to the drawing. “The template for the original doll design was what I saw in the magazine. It was modeled for foreigner. I redesigned it according to the Chinese face.”

Yin Mingyan’s original “Ni Niu series”, the head is made of two pieces of cloth filled with cotton. Nowadays, the doll she created has to use four pieces of cloth for the head. Although the process is complicated, it is closer to the shape of the real face. Yin Mingyan said that the most difficult part  is the production of the head. “The cotton itself is not uniform. After filling the surface fabric, the shape is easy to become irregular. The five features of the doll will be distorted and can only be done again.”

Whether the doll can live vividly depends not only on the shaping of the head, but also on the delicate depiction of the face. Yin Mingyan used the traditional embroidery method to embroider the details and expression of the face, giving the doll a little more charm and aura. She also try to buy soft, full-wool cheese, and hand-knits a unique hairstyle for each doll. 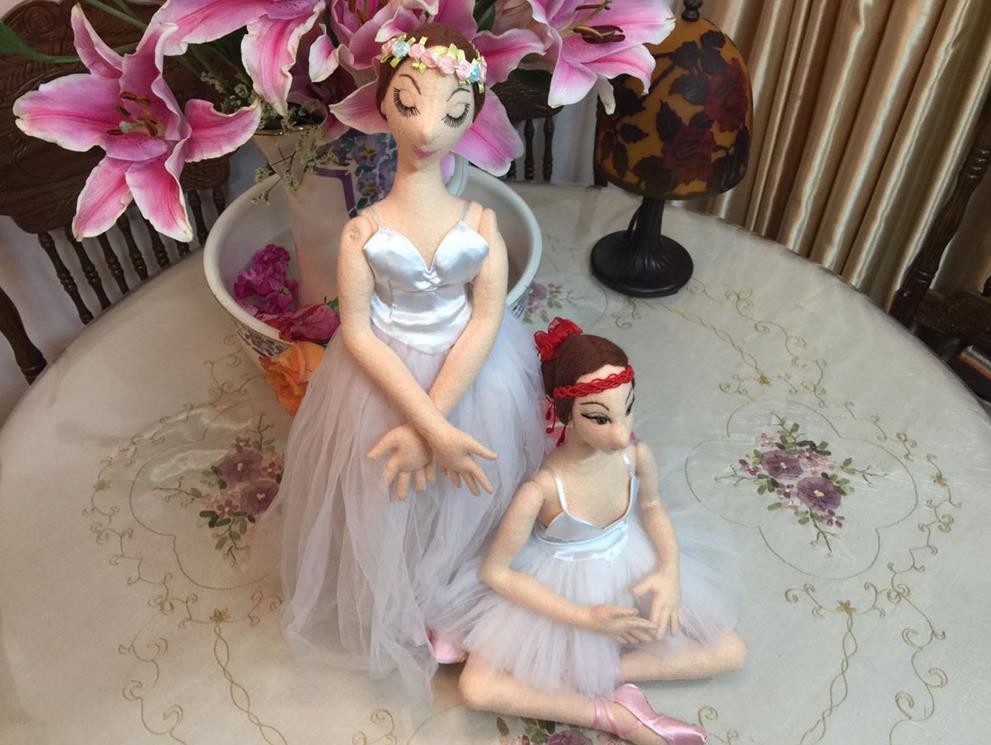 About a decade ago, BJD dolls (ball joint dolls) from Japan were introduced to China. The joints of these dolls were connected by spherical parts, so that they could display rich movements more vividly. Yin Mingyan loved it and decided to let her dolls “move” ,after careful study. Yin Mingyan added movable parts to the joints of the doll’s arms, calves and neck, so that the doll can sit and stand, and can pose various postures.

In order to make cloth dolls with ethnic characteristics, even at travel , Yin Mingyan will pay attention to and collect some folk cloth and ornaments, in order to use the national rag dolls. When she traveled to South Africa, she bought a local tambourine. After returning home, she tailored an African doll for this little drum. In the future, Yin Mingyan also plans to use a doll to make a scene, to interpret various story plots, and to give the dolls more connotations beyond the tradition.

Putting childhood dreams into life, who  said that it is not a beautiful  thing?